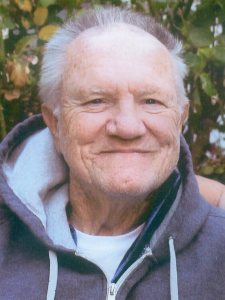 Danny Dean Sprague died at home on February 23, 2019.  He was born in Wapato, Washington on June 9, 1932.  His parents, Jean L. Sprague, and Edwin A. Sprague and brother, Jack Sprague preceded him in death.   He left behind his wife, Kay Sprague, of 57 years, 2 sons, Danny Sprague of Bishop and Brian Sprague of Torrance, 1 daughter, Valerie Behrendt of Bishop as well 1 daughter-in-law, Tracy Sprague and 1 son-in-law, Robert Behrendt as well as grandchildren and great-grandchildren, Rebecca Carlson, Randi Behrendt Hall and her husband, Heath Hall, and Travis Behrendt, Maddie Hall, Kylie Behrendt, Aiden Behrendt, Kinley Behrendt and Keeli Behrendt.  His niece Jackie, nephew Steve and their families survive him as well.

In 1960, he graduated from Montana State College, in Bozeman, Montana, after his Honorably discharged from the United States Navy as he serviced during the Korean War.  He met Kay while attending college and they married, June 10, 1961.  Upon graduation from college, he started his career with Federal Aviation Administration in Spokane, Washington, Palos Verde and Hawthorne, California, until retirement.  He and his wife built their retirement home here in Bishop, California in 1993; they have resided in Bishop for 25 years. He was active with the Sierra Flyers for a few years.  He volunteered for the Cup of Cold Water later to become Salvation Army Food Bank for many years.  He enjoyed talking and meeting people throughout his life.  He loved to tell stories and jokes.