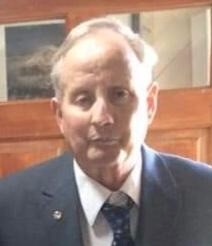 niel Bernards Arntsen passed away in Bishop, California on August 19, 2020 from complications of Covid-19. He was 75.

Dan was born November 3, 1944  in San Francisco, California to Silas, a mechanic and welder, and Louise Bernards Arntsen. He and his twin brother David were the youngest of three children.

Dan spent most of his youth in Santa Rosa, California, where he graduated from Santa Rosa High School. He served a mission for the Church of Jesus Christ of Latter-day Saints in Canada.

On August 28, 1970, he married Melody Ann Pratt at the Church’s Oakland, California temple, and the couple settled in Santa Rosa, where their oldest daughter, Erika, was born in 1971, followed by son, Thor, in 1972.

From Penny’s, Dan moved on to Union Carbide, where he worked as a boiler operator, followed by several years at the Mammoth Pacific Geothermal power plant. He retired after working at K-Mart.

Melody Arntsen passed away in 2002 and Dan married Julie McNees in 2010.

Dan was an avid photographer and loved backpacking, using his forays into the wilderness to catalogue the native flora and fauna of the Sierras. He considered Bishop the best place on Earth to live and was always happy to share with both locals and visitors why he felt that way.

Dan loved music and had an extensive collection of vintage vinyl and his children have fond memories of dancing to the sounds of Motown and the Brothers Four. He also played the harmonica and the concertina.

Dan was a faithful member of his Church, serving in many capacities. He was generous with his time and loved to serve others.

Dan is survived by his children Erika Hammer (Mike), of Brentwood, California, Thor Arntsen, of Carlton, Washington, Leif Arntsen (Amber), of Bishop, Kirsten Haye (Micah), of Bishop, and Peder Arntsen (Samantha), of Pingree, Idaho; by 17 grandchildren and 1 great-grandson; by his brother, David, of Houston, Texas; and by his wife, Julie, and her children Crystal McNees, Debbie McCollum (Eddie), Tiffany McNees, and Adam McNees. He was preceded in death by his first wife, Melody, and by his sister Ariel.