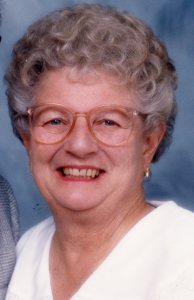 Louise Chappell, 97, passed away on August 21, 2020 at Bishop Care Center. Louise was born May 1923 to her parents Virdie Wilson and Jim Babby of San Diego, California. Louise was one of four sisters, it was during her high school years she met Barney Chappell who maintained a courtship with Louise until they could be married in 1942.

Louise and Barney were married for 67 years. They had two children Edward Chappell and Sallie Cline. Barney eventually moved his family from Corona, Ca to Lone Pine. Louise loved Lone Pine and the many friendships she built over the decades. Barney and Louise owned Dutch Boy Laundry when they first moved to town and then eventually the Indian Trading Post that still stands today as a last stop before hikers start their journey up Mt. Whitney.

Louise loved to go on trips looking for the most beautiful artifacts and turquoise jewelry available, never disappointing the customers who religiously came back every time they passed through Lone Pine. When Louise wasn’t working, she relaxed by going fishing and camping with Barney and the grandkids, Crowley Lake and Twin Lakes were a favorite destination. Louise was also an incredible cook. Thanksgiving and Christmas were filled with a bountiful table of homemade favorites and delectable deserts.