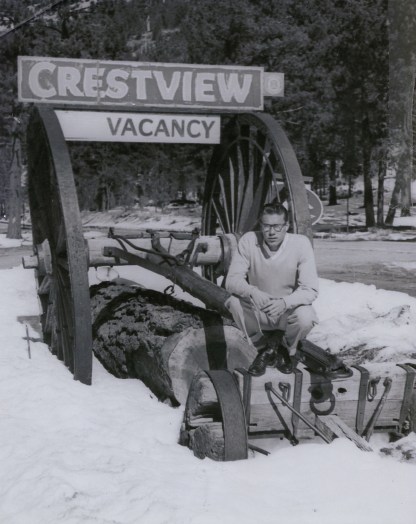 Born on May 27, 1930, in North Hollywood, Ca, Charles (Chuck) Phillip Carter, Jr. to Charles Phillip Carter, Sr., and Josephine Bedford, passed away on November 5, 2020, after months of struggling  with sepsis disease.  He was 90 years old.

Chuck lived in Bishop and attended BUHS School when his Father Charles Phillip Carter, Sr. was the Foreman of the Department of Transportation, Mono Co.  He graduated from BUHS in 1948 with many friends.  He then began living at the Crestview facility.  A lot of time spent at Crestview where a “rope tow” was the best invention in the day.  Chuck’s love of skiing continued until he spent his eightieth birthday skiing in the morning and then playing golf in the afternoon and a luncheon in his honor.

After spending time in San Francisco, he was able to get a full time job at Caltrans and moved back to Bishop, his home.

Chuck excelled in his interest in sports with his two boys and the Charter President of The Bishop Little League.  He was also a coach for many years.  He kept the clock for many years of basketball and when it came to rough and ready he was out setting the football field, surveying on the weekends for the city of Bishop and helping lay out the a Bishop Golf Course on weekends.

The motorcycle bug caught hold of the two of them and they each road their own bike and had all of the conveniences, including CB radios, hard side luggage to match, AM, FM radios and all the bells and whistles.  They had wonderful times, going to Aspen, Co. several times, through Utah, Monument Valley, and Zion, Bryce, Canyon Country, Four Corners and Lake Powell as well as many beautiful places in the USA and meeting great people throughout that time, in Bishop as well as different areas.

After working at Caltrans for forty-six years, ending his career as a Local Assistance Engineer, they decided to do some more traveling, this time in a Motor Home.  Banff and Lake Louise were highlights.  They would travel to daughter Gail’s home in Vancouver, WA, then head for the coast for some crab fishing.  At home, Chuck’s spare time was reading, doing cross-word puzzles, some jig saw puzzles and solitaire on the internet although during the week he was usually the first one at Hing’s Donuts, to talk old times with his old school classmates his favorite.  His next favorite was shopping at Vons’s for another social hour to help the ladies.   Direct, and reach things and get plenty of hugs.

Chuck, will be dearly missed by all that knew him, from every walk of life.  He was a great man, one of a kind. He loved his many dachshunds, Sophie was his best pal and now it is Tess, who he called Tessey.

Interment will be Saturday, November 14, at 1:00 at East Line Street Cemetery, for family and very close friends.  Due to Covid 19, there is not enough room for children at this time, thank you. All those in attendance will be required to wear masks and observe social distancing guidelines.