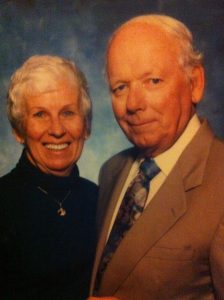 Grayden Anderson Wilkins passed away peacefully on November 16, 2020 at the age of 94. He was preceded in death by his adoring wife of 42 years, June Wilkins and his daughter, Schonett Funston. He is survived by his son Brian Wilkins and his wife Kim, his stepson Kenneth Brion Jr, his stepdaughters Debra Perilman and Diane Wickens and her husband Perry, his grandchildren Joseph Kelly, Alex and Heather Perilman, and Graham, Maxwell, Jack, and Cole Wickens. He is also survived by 3 great grandchildren, Averey, Harper and Oliver.

Grad was born in Alberta, Canada on May 16, 1926. He joined the military at a young age and he courageously fought in the Korean War which earned him US Citizenship at the age of 26. He met and married Maxine Brown in 1956. They were married for several years during which they adopted their two children, Brian and Schonett. He served as a California Highway patrolman for over 20 years, beginning his career in San Francisco and ultimately retiring from Santa Fe Springs. Upon retirement, he got his teaching credential and taught commercial school bus drivers and also taught at a Catholic school in Los Angeles. It was during these years that he met and ultimately married the love of his life, June. Grad and June lived in Santa Fe Springs for several years before moving to Big Pine. They loved living in Big Pine, California where they had direct access to the Eastern Sierras, where they fished, camped, hiked and enjoyed the outdoors with their cat, Topy.  They were active members of the community they loved. Grad and June enjoyed volunteering, Nights of Columbus, refereeing youth soccer and going to Church at Our Lady of Perpetual Help.

Services will be held on a future date.