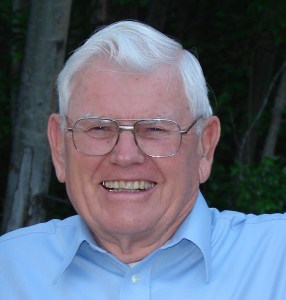 Elvie Henderson, long time Bishop resident, passed peacefully on March 12, at the age of 88, much as he lived his earthly life, surrounded by a loving family and friends in his hometown of Bishop. As he aged, Elvie commented nearly daily what a privilege it was to live in Bishop and the Owens Valley. He cherished that privilege.

Elvie was born on August 27, 1932 to Hugh and Ina (Imus) Henderson. He had two older sisters, Cleo Ray Yost and Mary Lou Cox. His birthplace was Nogales, AZ, at his grandfather’s ranch, as the young family was relocating from the Owens Valley to help work the Henderson family farm near Hudson, SD. Tragically, his father passed in South Dakota when Elvie was 6 months old. With help from a brother or two, Ina and her children moved back to Bishop to be closer to her family. She took various jobs including hay crew cook for several local ranches and waitressing in town. She started at Jack’s Waffle Shop the first day it opened and held this steady work for several decades. She later married Merrill Curtis, a good looking strapping young man about town, who matured into the role of stepfather and supporting and caring husband.

Elvie thrived as he grew up in Bishop. He was mischievous, smart, industrious, strong, and good with his hands, but he quickly learned that a career in sports was not in his DNA. He would often comment that a shortcoming of being a Henderson was “that we run in one spot too long”. Elvie graduated from Bishop Union High School in 1950 and Cal Poly San Luis Obispo in 1954, with a bachelor’s degree in mechanical engineering. A first in his immediate family!

Elvie started his engineering career employed by Westinghouse but this career was quickly interrupted by being drafted into the US Army. His college degree served him well in military service as he was quickly assigned to inspect and oversee explosive manufacturing at the Firestone Tire Plant in sunny Los Angeles as an Engineering Specialist Grade 4. He was honorably discharged from the Army in 1957.

During college and the Army, Elvie had his eye on a young, family friend by the name of Kathryn Amy Roe from Kingman, AZ. Elvie commented that it took seven long years, but he finally got her to say yes to his marriage proposal. They married in 1956 in Phoenix, AZ as Kathy graduated from ASU with a teaching degree. The young married couple initially settled in southern California where Elvie was employed in the aerospace industry, while Kathy taught grade school. Her teaching career soon ended with the arrival of their children, including Don and Hugh in rapid succession, and later a daughter, Pamela. Elvie and Kathy were soul mates and had a loving shared partnership through their 57 years of marriage.

With the desire to raise their children in a small town and be closer to family, Elvie and Kathy began to look for ways to resettle in Bishop. Their hope was soon realized with the purchase of Coach and Camper Service in 1970, beginning a thirty-year family business working side by side.

Also with the move to Bishop, their faith grew and strengthened, first by joining the Bishop Methodist Church, Church on the Mountain at Crowley Lake, and then Bishop Creek Community Church. Through this fellowship they made many close and lasting friends. Their testament to the congregation was their growing faith and the example they set of a loving and supportive marriage.

As their kids grew-up and started their own families, Kathy became more involved in community service, culminating in three elected terms on the Bishop City Council. Elvie continued to focus on keeping the family business running until its closing in 2002. During these later working years and into retirement, Elvie often commented that he stayed busy enough by accompanying and “driving Ms. Daisy” to her numerous community commitments and events.

Being mechanically inclined and handy, Elvie could fix or manufacture any item. He always had a couple of improvement projects underway and another two or three under research and design. Examples of these home projects ranged from converting an attached garage to a living room, construction of a family camper complete with cable loading system, artistic metal engravings and custom jewelry, a mechanical and then hydraulic dump trailers, hand-crafted maple bookcases that continues to grace his family room, and numerous other crafted items for both family and friends. His craftsmanship and ingenuity was greatly admired by all who had the opportunity to see his creations.

As Kathy’s health failed, Elvie’s focus changed from home projects to being her personal caregiver and primary support. When she passed in 2013, Elvie lost his soul mate and was never quite the same man. Although he put on a cheery and happy face, on the inside he was simply waiting to be called home to heaven. To help pass the time and stay active, Elvie could often be seen taking daily walks around town or sitting on a park bench watching the busy world pass.

Elvie is survived by his sister Mary Lou, his three children and spouses Don and Anne Henderson, Hugh and Cindy Henderson and Pam and Jim Dunn, grandchildren Cassie and Luis Baez, Elaina and Cody Barr, Sandra Dunn, and Steven Omohundro and Jo Barlow, also great grandson’s Cy Scott, Cal, Clay, and Cain Omohundro, great grandson Enzo Baez and great granddaughter Peyton Barr, a large extended family including numerous cousins, nephews, nieces, and many caring friends. Due to current safety precautions, a small private family graveside service will be held when Elvie is interned alongside Kathy at the East Line Street Cemetery. Later this summer a celebration of life memorial may be scheduled.

Elvie’s family would like to express their deep appreciation to Hugh and Cindy Henderson for their ever-present care of Dad during his last years, to the community neighbors that helped Dad home after he fell on a few walks, to the caring and professional staff and health care employees at Pioneer Health Care who made his last weeks comfortable and peaceful, and to Pastor Kelly Larson and wife Suzanne, who frequently stopped by to visit and comfort Dad. In lieu of flowers, the family suggests donations made in Elvie’s name to the Laws Railroad Museum and Historical Site, P.O. Box 363 Bishop, CA 93515.