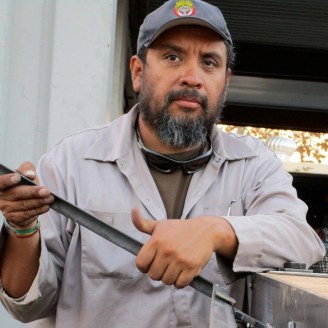 With great sadness, the family of Ron Napoles announces his passing on April 30, 2021, following an extended illness. Ron was born on October 14, 1966 in Bishop, California to Laurine (Bishop Paiute) and Joe Napoles. He graduated from Bishop Union High School in 1984. During high school, he played football and baseball and excelled in the arts, pursuing wood carving, drawing, painting and graphic design. In the summers of his youth, he enjoyed playing sports in the family fields and pastures, floating Bishop Creek and fishing with his friends and brothers. His love of diverse music bonded him to his siblings, friends and colleagues throughout his life.

Ron’s dedication to art and skilled craft extended throughout his life. He used his exceptional graphic design skills to create t-shirts, posters and banners for fire crews, tribal efforts, and community events. He made award-winning drawings and hand-carved wooden boxes. While he worked for the Bureau of Land Management (BLM), his designs garnered awards; a number became nationally-adopted graphics for the agency. He also developed welding and metal-working skills.

Following high school, Ron volunteered for the Inyo National Forest between semesters at Bakersfield College. This eventually led to a passion for wildland firefighting and management. From his work with the Inyo National Forest, he served on an initial attack helicopter for the BLM’s Apple Valley Flight Crew responding to wildfires. In 1988, he joined the Kern Valley Interagency Hotshot Crew, a highly-trained interagency fire crew within the BLM, and fought fires from Florida to Hawaii. Ron was a trusted team member and a highly respected leader within the Hotshots community, and is fondly remembered by his crew, many of whom came to Bishop to care for him in his final stage of life. In the over two decades that he served as a Hotshot, he advanced from crew member to Captain and ultimately to Superintendent. Ron held high expectations for himself, and was admired by his colleagues for his creativity, innovation, problem-solving, and his compassionate leadership. He would see challenges and put his mind and imagination to work, designing tools and prototypes to assist with the work of the crew. As superintendent, he excelled in teaching.

In 2010, Ron transferred to Bishop to be closer to his family. He worked as a dispatcher, then as a Recreation Park Ranger at the Bishop Field Office of the BLM until retiring in February 2021. He received the BLM’s national award for contributions in the field of interpretation in 2015, collaborating with Round Valley Elementary School students in designing a set of interpretive panels for a discovery trail at the Horton Creek Campground. Ron’s unique approach to interpretive projects was of the highest caliber, and was instrumental in advancing the agency’s commitment to connecting the community with preservation and enjoyment of public lands.

Many will also remember Ron for his tireless work in defending the rights of the Bishop Paiute residents in preserving land assignments and traditional governance models. With keen acumen and quiet courage in support of his Aunt Gebbie, and following in the footsteps of his mother Laurine, he sought to educate the community about the history and legal status of the peoples’ land rights in the Owens Valley. He brought focus to the importance of preserving those rights as well as the Tribe’s long standing consensus-based governance models.  He wanted the best for his community and spent the last years of his life, joined with family and close friends, in advocating for the interests of its members.

Ron is survived by his wife and childhood classmate, Carla Spencer Napoles; stepson, Ace Selters; his father Joe Napoles; uncle and aunt, Jim and Sheila Grover, uncle Gene Pasqua; his siblings Debbie Williams, Val Goodwin, Rick and Yolonda Napoles, Mark and Andri Napoles; his nephews, James Napoles, Wade Williams and Elvis Napoles; and many other members of his extended family. He was preceded in death by his mother, Laurine “Lee” Napoles, his aunts Geraldine and Josephine and uncles Richard and Roger Warlie.

A Celebration of Life for Ronald Napoles will be held on June 19 in the Heritage Arts building at the Eastern Sierra Tri-County Fairgrounds. Donations in Ron’s memory may be made to the Ron Napoles Scholarship Fund at Bishop Union High School.