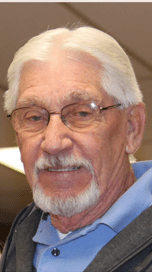 Kenneth grew up in Doyle Colony in Porterville and graduated from Porterville Union High School in 1955. Within a week of graduation, Kenneth entered Basic Training in the United States Air Force at Edwards Air Force Base. After basic training, he was transferred to Cheyenne Wyoming and entered automotive repairman’s school. In 1956 he was deployed to Korea where he repaired jeeps, buses and light duty trucks up to 5 ton wreckers. In 1960 he was deployed to Germany, Sembach Air Base where he was classified as a sharpshooter. Kenneth was transferred back to the United States and assigned to several bases; Ardmore AFB, Oklahoma, Orlando AFB, Florida, Holloman AFB, New Mexico, Forber AFB, Kansas and Chanute AFB, Illinois.  Kenneth was Honorably Discharged in July 1963 as an Airman Second Class.

Kenneth’s daughter Teresa Jane was born in Orlando Florida in 1958, son Kenneth Lee Jr born in Ardmore Oklahoma in 1959 and daughter Tori Lea was born in Twentynine Palms California in 1968.

Kenneth started a career in truck driving while living in Twentynine Palms. In 1970 he moved to Bishop with his family and worked for several local trucking companies.  Kenneth would haul freight, ore, and fuel for the next 30 years until his retirement in 2000.

In 1981 Kenneth started bowling. He was an officer in the Bishop Bowling Association for several years, also holding league officer positions. He also enjoyed playing darts for fun, later joining the Eastern Sierra Dart League. Kenneth was a Life Member of the VFW Post 8988. Car and truck restoration was a passion, and Kenneth never missed a car show. Hot Rod drag races were on the top of his list of things to do.

Kenneth is preceded in death by his parents Edna and Vernon, and his son Kenny Jr.