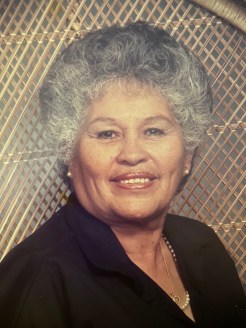 Bertha was called to her “home far away” on July 4, 2021.  She began her journey peacefully at home in Bishop surrounded by her loving family.  She was born in Benton, CA on October 12, 1922, to the late Pete Watson and the late Teenie Lent. She had two sisters, Gladys Saulque Beauregard and Corrine Piper.

Bertha was sent from Benton to the Sherman Indian School in Riverside, CA.  After graduation, she returned to the Owens Valley and married Edward Willis.  Together, they raised 6 children.  She worked as a housekeeper and later for the Inter-Tribal Council of California.  She also worked for many years at the local J.C. Penney Store from which she retired.

She experienced so many changes during her 98 years in this world.  She recalled, as a child, fetching water on horseback.  During the early years of her marriage, she cooked on a wood stove for her family.  She saw this country put a man on the moon and was introduced to telephones, television, and computers in her lifetime.  Bertha loved music, singing, purple bottle hunting, and reading.  She also recognized the importance of voting and served on election boards throughout her life.

She was an early member of the Valley Presbyterian Church and later enjoyed services at the Foursquare Indian Mission on the Bishop Paiute Reservation.  Her favorite hymn, The Old Rugged Cross, brought her peace and comfort during her last days.  She knew the Lord and this brings the family comfort in her passing.