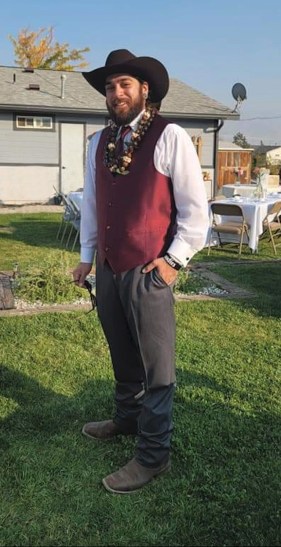 Skylar was born on May 5th, 1992, on a stormy day in Bishop California. As a baby he was very independent and did everything early, like crawling, walking and talking. He was very outgoing and animated at an early age and brought much joy and laughter to his Big Pine family.  He spent some of his young childhood years living in Hawaii on the island of Oahu. During his time there he loved swimming and having a barbeque at the beach with his brother Tyler and his family, riding bikes and visiting his Polynesian family. Skylar and his brother Tyler would play with their friends at the neighborhood playground and wait impatiently for the manapua man to come around. Before you knew it, there was a posse of little brown boys running from the playground shouting manapua man, manapua man, racing home for money and they would sidle up to his van to buy treats. Skylar attended Kindergarten and most of First Grade in Hawaii and after a few years returned back to the Owens Valley with his mom and brother Tyler to take up their familiar life in Big Pine.

Skylar had a deep love and respect for the traditions of his Paiute and Polynesian heritage and also for his elders, especially his grandparents. Living in Big Pine gave him the chance to embrace his native Paiute culture and he did so with encouragement from his family and neighbors. As a boy he started as a grass dancer and progressed to a traditional dancer as a teenager and as an adult. He learned Indigenous songs and was welcomed into a drum group that had great camaraderie amongst their drumsticks.  He met and made many lifelong friends while attending Big Pine School. During his adolescent and teen years he swam and fished the waters of the Owens Valley, skied and snow boarded Mammoth Mountain, camped with his family at Diaz Lake, camped with his friends at Baker Creek and lived life having adventures in the Owens Valley, as only a kid knows how.  He participated in many school activities from his elementary into his high school years including Missoula Theater, Inyo County Spelling Bee and sports, always sports. Even though football and baseball were his favorites, he was always down to shoot some hoops.

After graduating high school in June 2010, Skylar journeyed to Sioux City, Iowa to attend Briar Cliff University on a football scholarship. Like everywhere else he went, he made many friends there. With his quick wit, sense of humor, and charismatic personality he was always the life of the party. He knew no strangers because they always became his friends.  He loved sports, hunting, fishing, swimming, reading, hanging out with his friends and family and especially cooking. He was passionate about food, and cooked in various restaurants, and before leaving Iowa was the Assistant Culinary Director at Johnny’s Italian Steakhouse in Des Moines. His culinary idols were Marco Pierre White and Anthony Bourdain. He loved creating new dishes and exploring current recipes.

In 2019 he met the love of his life, Yesenia Arellano, and in October of 2020 they were married in Big Pine. Her parents Araceli Morales and Carmelo Arellano immediately welcomed Skylar into her family, as did her Grandma and siblings Joanna, Jessica, Abraham, Diego, and the rest or her family. Skylar and Yesenia’s adventures together were unexpectedly cut short, as were their dreams of traveling the country and the world. He wanted to share with her his love of other cultures and their culinary traditions, as well as show her the places in Hawaii where he spent part of his youth.

Skylar journeyed from this world to begin his next adventure on July 1st, 2021. He was welcomed by many relatives and friends who have gone before him, including his Grandmas Patricia Vance, and Wendy Harris; Grandparents Pati and Siamanave Amisone; Great Grandmas Norma Spratt, and Cleo Miles; his Poppa Dell Heter, and his cousin Carlos Hernandez. He is also welcomed by his longtime childhood friend Irving Thomas and Iowa buddies Adam Stearns and Bobby Meehan.

Skylar is loved and will be immeasurably missed by his wife Yesenia, and her family; his parents Joe and Shari Harris; his brothers Tyler, Roman, and Tana Amisone; his sister Selia Amisone; his Grandpa Bob Vance and Grandparents Joe Harris Sr. and Lyla Harris; Great Grandpa Cy Reed; Great Grandmas Marilyn Booth and Kathy Davis; his Aunts and Uncles all had a great influence on his upbringing and helped to shape him into the Skylar we all knew and loved,  Aunt Roberta Hunter and Ronald Braun, Patrick and Lenna Vance, Paula and Jason Thomson, Sara and Josh Alves, Jeremy and Lynda Vance, Jason Barlow, Henry Amisone and Siamanave Dinoyo, who was like a sister to him; his Nieces Malia Maxwell and Kamea Amisone were the apples of his eye and nephews Tama Dinoyo and Keahi Amisone; he is loved and will be missed by many, many cousins and friends.