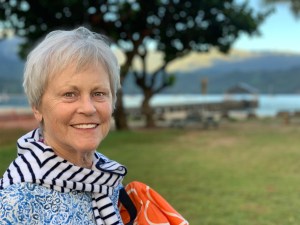 Susan Lee Kobayashi (nee Hagist) died at home with husband Stephen Akira Kobayashi and friends and family at her side.  Born in the small farming community of Mascoutah in Southern Illinois, she grew up working in the family general store with her sister Mary. She attended Mascoutah schools until 1963 when she left home to attend Duke University in Durham, NC, earning a BSN in Nursing in 1967.

Then with classmate Kathy she headed west to begin her nursing career in Denver, CO. In the nearby mountains she first learned to ski, starting a lifelong love of outdoor activities. Susan was a surgical floor nurse at Denver General Hospital when she met Stephen, who was beginning his surgical residency there. She immediately loved his sense of humor, and he loved that “she wouldn’t take any crap from anybody.” They were married within five months of having met on 3/10/69 in Denver and came to CA to honeymoon at Mammoth Lakes-enduring one of the most historic snowfalls ever.

Susan continued her nursing career at General Rose Hospital but retired with the birth of her son Charlie in 1970.  Anna was born in 1972 as Stephen was completing his residency, and the family first moved to Inyo Country in Lone Pine, CA when Stephen joined the medical practice of Christianson and Jones. In 1973 the family moved to Bishop, where Stephen opened a solo practice in general medicine and surgery. Susan began a new career as an office manager in addition to raising Charlie and Anna. Karyn was born in 1982. Susan loved being a mom—and always emphasized the importance of hard work, honesty, and kindness. She continued managing Stephen’s office for 34 years with friends Pat and Gina until his retirement in 2008. Additionally, in 1990 Susan began a second career in public health as a school nurse. She tended Bishop Elementary, Round Valley School and Big Pine School. She also served on the school board and once was on the grand jury.

Susan enjoyed the beauty of the Eastern Sierras – from relaxing in a boat on Crowley Lake to hiking to the top of Mt. Whitney with Charlie. She incorporated her love of exercise and the outdoors into her daily life—walks down Mummy with pals Patty and Marilyn, day hikes with Linda and her hiking group, ski days with Cyndi, yoga with Mary. And she was always game to take her love of outdoor activity into her travels- caravanning to Aspen with the Ungersmas to ski, wading the Virgin River Canyon with Rick and Randy in Utah, cycling with Anna in Maine, and snorkeling with the Stones or Karyn in Hawaii. Some of her favorite trips also included seeing the fjords in Norway with Stephen, Germany in Christmastime with sister-in-law Melody, and London with Kathy. Susan liked to keep her mind sharp, discussing books with her book club, playing bridge with Carol, Marti, Ellie and Dori, and taking up new hobbies like becoming a Master Gardener and knitting with Barri. Her friends will all miss her laughter, positivity, and thoughtfulness.

In March of 2016 Susan was diagnosed with stage 4 peritoneal cell cancer. She had many treatments at St. John’s Hospital in Santa Monica, and her family feels very blessed to have had five years with her in good health before the disease progressed. She passed away at home peacefully on September 6th, surrounded by family and friends. She leaves behind Stephen, her husband of 52 years. Fellow survivors include: Charlie and his wife April and children Hannah and Ryu; Anna and her husband Scott Lomes and son Ethan; and Karyn. We will all miss her very much.

Her funeral service will be held on 9/18 at 1pm at the Methodist Church in Bishop before she’s buried at Green Hills Memorial Park in Rancho Palos Verdes, CA. In lieu of flowers, donations may be made to the Eastern Sierra Cancer Alliance; PO Box 1523; Bishop, CA 93515.