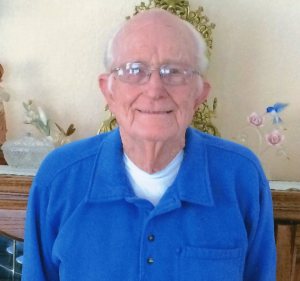 Don Carlos Castleberry was born in Tucson Arizona to Holly Anita Davenport and Don Carlos Castleberry. He had two brothers Bill and Charles and a sister Dorothy. He was preceded in death by his parents, two brothers and sister and one daughter  Donna. He was married to his loving wife Judy Anderson Speed March 30, 1985. He is survived by his wife Judy, his sons Clifton and wife Marianne, son Bill and Daughter Patty Brower and stepsons Randy and Melody Speed, Ronnie and Christina Speed, Russell and Linda Speed, Rodney and Jenni Speed and Rick and Lea Speed, along with numerous Grand Children and great grandchildren.

Don joined the Army when he was 16 and went on to serve in the 82nd Airbourne, the Navy as well as the Air Force. He retired from the Air force when he turned sixty as a Senior Chief Master Sargent. He loved the service and was not ready to retire. He went on with his civil service job and retired from China Lake Naval Weapons Center in 2001 and then moved up to Big Pine, California where he purchased Dalton Appliance and worked that for several years.

Don was a life-time member of the American Legion Post 457 in Big Pine. While there he served as Commander, First Vice, Treasurer, Adjunt and Boys State Chairman for several years, which he dearly loved.  Don liked people and always strived to make everyone feel welcome in his home. He was a great husband and a very family oriented man.. He will be dearly missed by all.

His internment will be held at the East Line Street Cemetery in Bishop, CA on January 22nd at 11:00am graveside with refreshments following afterward at the Calvary Baptist Church with Pastor Rick Klug along with the American Legion of Bishop will be officiating the services.