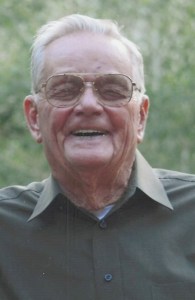 Leon Hugh Stevens was born January 16, 1933, in Alma, Nebraska.  He passed on May 5, 2022.  His parents were Leon Hugh Stevens and Mary Pauline Dodge.  His grandfather, Dr. Burton Dodge, delivered him at his hospital in Alma, Nebraska, which is still there today.  The hospital was later turned into a boarding house.  His father died of pneumonia when Leon was four years old.  His mother then married Henry Danielson, his step-father, whom Leon loved.

Leon (Steve) was supposed to be a doctor, and had a scholarship to a Kansas medical college.

This plan was interrupted when his step-father got Parkinson’s, and Steve had to take over the farm.  As a boy on the farm, he loved the wildlife and all farm animals.  If an animal was injured, he doctored it.

Their advice to young couples is, “Have fun together!”

They later had a farm sale and headed to California where they stayed with Uncle Lawrence and Aunt Mamie in Santa Ana.  After two weeks of searching, Steve saw an ad in the paper.  The ad led to Steve getting a job as a mechanic because he had always worked on farm equipment.  Later he worked for Chrysler Corporation at their Training Center in Anaheim.  There he helped with the design of new cars.  Lee Iacocca, CEO of Chrysler Corporation, gave Steve good advice.  He said, “To be successful in your business, make people like you.”  That was great advice.  Steve attended Orange Coast College and Oceanside Junior College studying all phases of mechanics.

Steve did not like the city back in those days.  He would come to Bishop hunting and fishing as often as he could.  He got a job at Bob Braun Automotive (now Mr. K’s).  He also worked for Luther Motors, and finally opened a small garage across from Bank of America.  Every morning he would sit out front and have coffee with Hackett Johnson, Pastor of the Presbyterian Church.  The property was sold, and Steve had to move and eventually opened Steve’s Auto and Truck Parts.  Steve and Willis Smith, met with LADWP about purchasing their leased property. At the first LADWP land auction sale, Steve was able to purchase the land where Steve’s Auto and Truck Parts exists today.  That was a miracle!  Steve ran that business for 52 years with his wife, Marlene.  Steve always said, “My employees make this business.”  He loved them all!  He said, “My customers are my friends.” The business was sold nine years ago to Robert and Katie Dowers.  He had known Robert since he was a little boy and felt he was the best person to carry on the business with service, honesty, and integrity.  Robert and Katie are doing just that today.

Steve and Marlene lived on Ranch Road for 52 years where Steve was always interested in the Bishop Creek Water Association.  He wanted everything to be fair, equal, and for everyone to get along.  While serving as president of the Association, he worked with LADWP, Southern California Edison and Inyo County to try to solve problems.

Steve’s hobby was gardening.  He loved growing everything, especially vegetables and flowers.  These were shared with everyone in the Bishop area.  Steve and Marlene have thoroughly enjoyed their retirement.  They have traveled around the world.  They have been fortunate to be able to go to many foreign countries and states in the USA to conventions for auto parts dealers.  They traveled to every state except North Carolina.

He was very interested in the history of this valley and summited almost every peak.  He also loved exploring every old abandoned mine he could find on this side of California and Nevada, always dragging his grandkids along.  When he retired, he and his close friend, Richard Moss, continued this tradition, finding lost herds of wild horses and big horn sheep.

Steve supported the United Methodist Church for many years in the Lord’s work to help with children and youth.  In the last years, Steve and Marlene enjoyed studying the Bible and having their fellowship with Calvary Baptist Church.  He was a part of “God’s Wildmen”, which is a men’s Bible study.  Steve was interested in the youth of the community and wanted them to live a good life.  Many students worked in the office and shop at Steve’s Auto Parts and said “This is the best job I ever had.”  Steve supported both the Junior Livestock Show and Auction, any high school sports programs in need, and also was a big help to Gregg Newcomb’s Bishop Union High School auto shop class.

Steve was a unique person.  He was kind, loving, and generous.  Marlene always said, “He would give away his last shirt if someone needed it.”  He was a man of integrity and strong character.  He always tried to stand up for what is right in the eyes of God.  He was loved by many, and he will be missed.  With a beautiful sunrise and an incredible sunset on May 5, 2022, Steve was welcomed to heaven where he will help with the beautiful flowers there.  Many friends and family in Kansas and other states are sharing in the sadness and cannot be here.

Steve and Marlene have two children, Mark and Michelle, and two grandchildren, Zayne Charles and Clayton James.  These boys loved their grandfather, Steve, who has been their inspiration, their idol, and their rock!

Refreshments will follow the service.  There will be a private burial.

Donations in Steve’s memory can be mailed to Bishop Union High School Career and Technical Education Department (CTE) at 301 N. Fowler St. Bishop, CA  93514 or to a favorite charity of your choice.