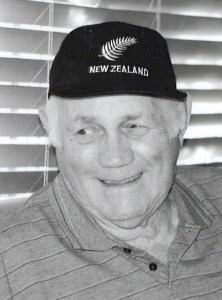 William was born on Aug 21.1925 to William and Wilma Lemmon and went to be with his wife in heaven on April 19 2022. He went to school at Delano kindergarten thru 12th grade, then he went into the military in 1943 and was honorably discharged in 1945. He met Louse Davis in 1951, she had two girls Judy Pippin (Graham) and Carol Pippin (Hilligoss) and they got married on July 4 1952. After they were married another daughter came along, Marsha Lemmon and Marie Lemmon (Drake-Zinke) and a son Michael Lemmon. He went to work for Southern California Edison in 1958 through 1975 when he injured his back at work, He was retired from Edison in 1978. After that he became a shop sitter for Beulah Chacon until he turned 80. Then they started going on cruise’s every year through the mid-2000s. He was an avid bowler until he got Charcot syndrome and could not bowl any more. He had 3 sisters and 1 brother who all proceeded him in death. His wife of 64 yrs. proceeded him and his daughter Marie. He will be sorely missed by all of his family and friends.