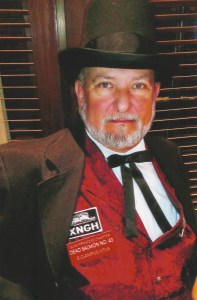 Michael Joseph O’Leary, born September 14, 1964 to Merrill and Margaret O’Leary passed peacefully July 10, 2022 with his wife and family by his side.

After high school graduation, Mike joined the U.S. Navy. He served as a Navy Seal in Desert Storm. After his service to his country, Mike remained in San Diego where he met and married his 1sst wife, Karen. They had two daughters, Rachel and Faith.

Mike’s family moved to Bishop in 2003 to enjoy life in our small community. In 2007 he met Mary Zaragoza and they quickly became inseparable. They were married July 4, 2018.

Many people knew Mike as a sales manager for High Sierra Distributing, where he worked for many years. In 2018, Mike became a respected Inyo County Deputy Coroner and funeral arrangement counselor at Bmne Mortuary.

Mike is a proud member of the Ancient and Honorable Order of E Clampus Vitas and served as their Nobel Grand Humbug year 6019 (2014). Mike enjoyed playing darts, camping, shooting and just being around his many loving friends and family.

Mike is survived by his wife Mary, Brother Jim Campbell and his wife Maggie, Step­ daughter Karen Lee and husband Mike Trout, grandchildren Meghan, Alexis, and Mike Trout  and granddaughter Hailey Jane O’ Leary. He is also survived by his in laws, parents Adie and Alex Zaragoza, and siblings Jeanie and Dan Cornet, George and Pam Zaragoza, Tina and Brian Tillemans, Rachel Zaragoza and Rick Rodriguez, Alex and Mary Zaragoza, and numerous nieces and nephews. And of course, his ECV Brothers-   What Say the Brethren?

Services will be held graveside at East Line Street Cemetery August 5th, 2022 11:08 am with a reception to follow at the VFW. In lieu of flowers, the family asks a donation be made to Northern Inyo Hospital Auxiliary.