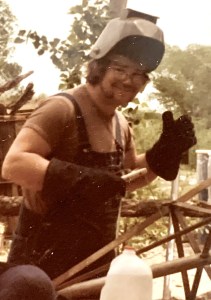 Hall- “Pokey” John Charles Hall of Benton, CA passed away on September 17, 2022 peacefully in Bishop, CA.  Pokey lived a happy, carefree life and was loved by all.

In Poke’s younger days you would find him under a shade tree working on one of his hot rods or a fishing pole in hand. Eventually, he would attend welding school in Los Angeles, CA.  He worked as a welder/mechanic for many companies in his lifetime such as Union Carbide, Town of Mammoth Lakes, Stone Brothers, Wes Construction, Paiute Pit, American Ready Mix, Utu Utu Gwaite Paiute Tribe, and numerous mines, Wind Mountain, and Hyden Hill. Pokey was a hardworking man that cherished his family.  Pokey settled in Fernley, NV to work and raise his family.  Pokey loved his boys and spent a lot of his free time coaching, or spectating their sports activities.  Anything his kids wanted to do he would find a way to help them achieve their goals.  He was a proud Grandpa and would often sneak in to town to catch a game or visit for a few days.  Without a word he would skip out of town.  He has left many memories to last a lifetime.  He will be sorely missed by all.

The Hall family would like to THANK everyone that has taken the time to care for our Father.  We truly appreciate your generosity and condolences.

Services will be held on Saturday, October 8th at 11am, 567 Yellow Jacket Road Benton, CA.  Traditional Potluck dinner will be held.